One of our core values is to promote the development of effective oversight by legislative bodies. The Carl Levin Award for Effective Oversight is presented on an annual basis to one or more individuals who have played a central role in an oversight investigation conducted on a bipartisan basis with a dedication to fact-finding.

The award is established, in honor of the work of Senator Carl Levin, to promote bipartisan, fact-based oversight and to recognize those legislators who conduct it. Politically or ideologically driven oversight damages public confidence in government, diminishes legislative comity, distorts public policy and wastes taxpayer dollars. When conducted well, on a bipartisan basis, with a commitment to finding the facts and uncovering the truth, oversight fulfills the checks and balances envisioned by our Constitution, fosters bipartisan legislative relationships, builds public trust in legislatures, and improves public policy and government programs.

Nominations are accepted on a rolling basis throughout the year with a cut-off date of October 31. The Selection Committee meets yearly in November to assess received nominations and make an award decision.

To be selected for the Carl Levin Award for Effective Oversight, a candidate must meet and the nomination must address the following criteria:

Past Recipients of the Award 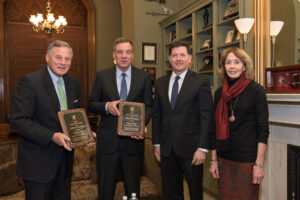 Please fill the form below to make a nomination for our Carl Levin Award for Effective Oversight. Nominations are reviewed yearly in November and award winners are announced upon selection.